See those? Those are Northern Pufferfish, also known affectionately to anglers in my area of the country as blowfish, and of course as chicken of the sea or sea squab.

These fish belong to the species Sphoeroides maculatus, and they carry a pretty interesting secret.

They’re some of the best-eating, downright most delicious fish that come into our waters when they warm up in the summer and through the early fall.

When I was younger, I used to bring a few crab traps down to this one pier along the bay, drop down some bunker and chicken and load up on them. We used to catch hundreds (not an exaggeration) in the space of a few hours.

The labor of love was worth it, although it wasn’t until recently that I learned a highly efficient, relatively easy way to clean these fish en masse.

I recently came by only four (hardly enough for an appetizer) but fortunately, I’ll be able to demonstrate my technique for you here, which you can then replicate if you so choose.

But first, before you learn how to clean blowfish, a (very) important note.

As should be your maxim with all things foraging, fishing and hunting, if you cannot make a 100% positive identification of your quarry, do not eat it.

Blowfish belong to the family Tetraodontidae. They live in warm waters all over the world and are often called balloonfish, pufferfish, and sea toads (among other equally colorful names).

To my knowledge, all species produce more or less of an extremely potent neurotoxin known as tetrodotoxin, for which there is no known antidote.

Every year, people die from eating blowfish that are improperly prepared. Do not take the chance unless you know exactly what you are eating.

Now, with that said, Northern Pufferfish, the species to which I am referring as “blowfish” and properly qualified by the specific name mentioned above (Spheroides maculatus) are generally considered safe to eat.

I have read that our blowfish (Northern Puffers) produce tetrodotoxin, but only in relatively low concentrations, the highest of which are found in the fish’s skin and viscera.

Therefore, I advise (as do many others) that if you intend to catch, clean, cook and eat Northern Pufferfish, carefully remove the skin and all traces of the fish’s internal organs. This is what I have always done, and I have never been sick in the wake of a blowfish feast – and I have eaten untold hundreds of these delicious delicacies.

Just remember: if you cannot identify it, do not attempt to eat it. Period.

How to Clean Blowfish

Now, with all that warning out of the way, if you’ve caught some blowfish and are interested in a faster, cleaner, easier way to clean them for the pan, give this method a go. It’s marvelously easy and I’ve come by it through quite a bit of trial and error.

I used to skin and clean these fish in a laborious process that left me tired and left my fingers rubbed raw (they have spiky skin that is painful to grip for prolonged periods of time). Now, I practice this new technique that has yielded me the best results of the bunch – my days of struggling through a big mess of blowfish are over. Now I know how to clean blowfish the smart way.

For this, all you’ll need are a sharp, sturdy knife with a relatively thick spine, a fork, and a cutting board, as well as somewhere to place the filets while you’re working.

Leave the filet knife in its sheath. Due to the nature of this technique, you need a stiff, sturdy knife, one that, preferably, lacks any flex in the spine.

First, place the blowfish in question on the surface on which you’ll be cutting. Stabilize the fish by pressing down on it with your non-dominant hand. Then, as shown in the picture below, make a cut behind the fish’s head.

Place the knife to the side, you are done with it for now.

Next, as shown in the image below, peel back the skin slightly behind the head, until you have exposed some of the white meat.

Take your fork, and press in into the meat about a half inch back from the cut you made, all the way through the fish (and around the spine) till the tines of the fork come out of the bottom of the fish.

Continue pulling, and you will notice that the skin starts to peel off of the fish, like you are unrolling a sock.

Keep pulling, and the skin will continue peeling off of the fish, inside out

Keep pulling, and in a few minutes, the head with the skin attached will shear off of the back of the fish at the tail, leaving you with a near-perfect morsel of meat, and almost no waste.

At this point, flip the nugget over and make sure there’s no red on the meat where it was in contact with the viscera. If there is any, trim it off, just to be safe. The same goes for the skin; if you have any white, silvery areas along the margin of this morsel of meat, trim it off.

I’ve never had any problems, but you can never be too safe.

Now you know how to clean blowfish the easy way. Now, enjoy the bounty! 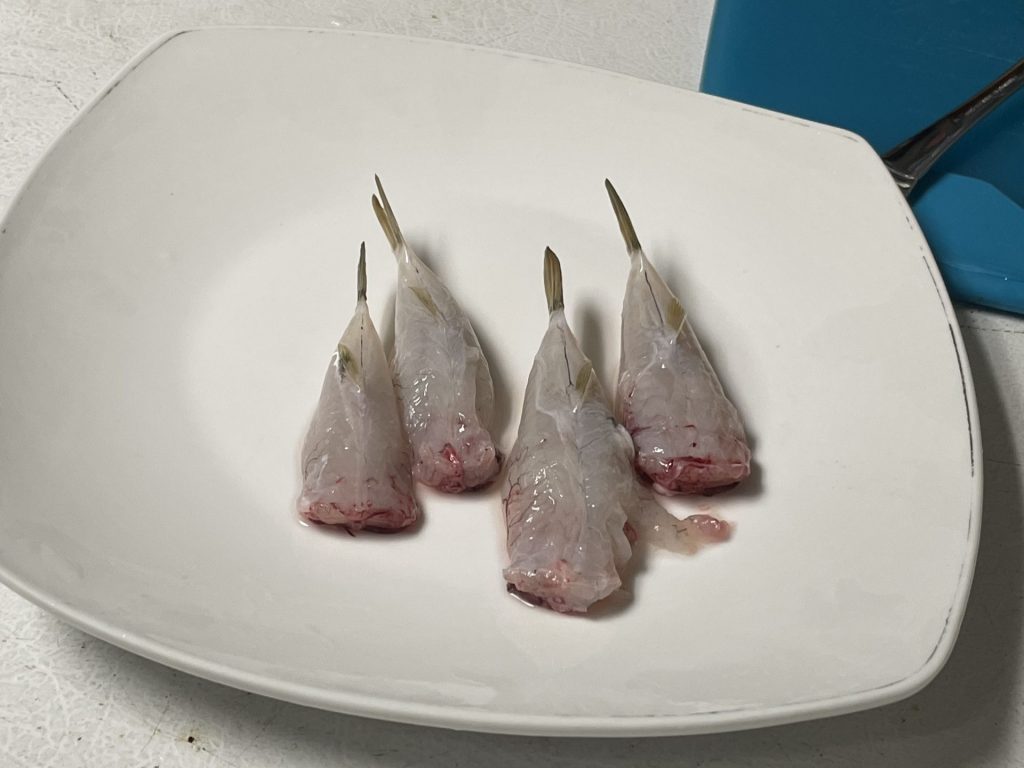 Try Your Hand at Catching Them

As far as I know, blowfish are never offered for sale in seafood markets. At least, I have never seen them for sale, even bayside. I’ve also never seen them on the menu anywhere, either. (This doesn’t count Japanese restaurants that serve fugu, since that’s not our blowfish anyway.)

That means you need to catch them on your own, even if you now know how to clean blowfish.

The best tackle I can suggest for catching a bounty of blowfish is actually hardly considered tackle at all. Get yourself a crab trap, find yourself a spot on the bay that has nice warm water and no overwhelming currents (preferably between 5 and 10 feet deep), bait the trap with either bunker or chicken, throw it over, and pull it up every minute or so. (Note: make sure you tie down the chicken or bunker with wire or they’ll make off with it, just like crabs would.)

When the fish are thick, I’ve caught more than ten in a haul using this technique. It’s much easier than using hook and line, because these fish have beaks that make it easy for them to bite through your line. They’re also nibblers, making it hard to set the hook on them.

However, I’ve also done well fishing for them using hook and line. What you’ll need is a weight that will enable you to hold the bottom, and a hook with a long shank – I use an aberdeen hook

The long shank is imperative because, as I mentioned, these fish have beaks and can easily cut through the line. Use a small hook, too – then, ball up a tiny piece of chicken and press it right down over the point of the hook.

Cast your line out into the water, wait for the telltale tapping, give the fish a second or two to commit to your bait, then set the hook and bring them in.

You just might have a blowfish at the end of your line, there.

Tight lines and be safe.