Whether your secret weapon is a crankbait, a jerkbait or a stickbait, lipped plugs are highly effective fishing lures. No one will argue that. A lipped plug won’t outfish every other bait all of the time, but no tackle box is complete without them.

They enable you to cover large areas of the water, at all different depths in the water column, and can be fished in a variety of different methods, using different techniques and cadence. They can be burned back to the boat, bounced off of structure, or twitched slowly on the surface. This only paints a small portion of the picture of the versatility of diving plugs.

The drawbacks: they take a great deal of skill to work effectively, and they need to be tuned in order to run true. This post will help with the latter concern.

Drydock the Plugs for Tune-Up Services

While many quality plugs, like Rebels, Rapalas and Bombers, will frequently run true right out of the pack, every one in a dozen will not run straight. Most frequently, lures from the factory will exhibit minor incongruities in their design that cause them to run to the right or the left. A severe defect will cause the lure to surface abruptly when retrieved, making it all but impossible to fish effectively until it has been tuned.

The problem here comes from the fact that plugs are actually extremely intricately designed lures that go through trials of development and testing before the design can be finalized. They are the sports cars of the tackle world, a metaphor with which you can probably sympathize from the nature of their high prices. Luckily, tracking issues are easy to fix.

If the lure runs to the right or left, here’s your fix. Reel in the plug and look at the lure head on, as shown in the picture below. 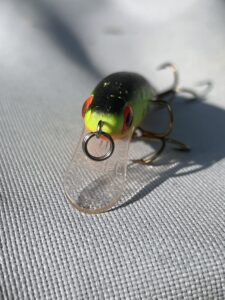 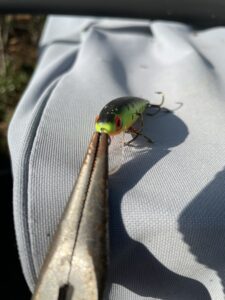 That’s really all there is to it, but be very ginger about making adjustments. Fishing plugs are very sensitive to changes in their tuning, and a slight alteration of the balance will often bring about a drastic response. Make a slight change, cast and retrieve the lure, then continue to adjust the eyelet if the tracking problem persists.

That’s how you tune a crankbait in simple terms, but just in case you were here for some other useful tips, consider the following.

Other Tips for Better Action and More Fish

There are a few other tips and tricks you can follow to change or improve the action of your plugs. Some of the following may provide you with better results, given the nature of your specific fishing lures of choice.

Swap out the Split Ring

Most plugs come with round split rings, which can complicate the action of the bait. If you can’t solve the tracking problems of your plugs by tuning the eyelet, try switching out the round split ring that came with it with an oval one. You can get these at most big box retailers, sporting goods stores and tackle shops.

Staples like the clinch knot, palomar knot and arbor knot are as essential to a fisherman’s inventory of skills as pliers and a knife are to the inventory of the tackle box. However, they aren’t much use when fishing plugs, especially if you tie your line directly to the split ring or the eyelet of the plug.

Plugs have very sensitive action, and the influence of the line will interfere with the lure’s natural tendencies. Instead, learn to tie a Rapala knot, which is effectively a clinch knot tied to an overhand knot, which results in a non-slipping loop which will enable the lure to float and swim unencumbered by the line.

Don’t Use a Swivel (Maybe) 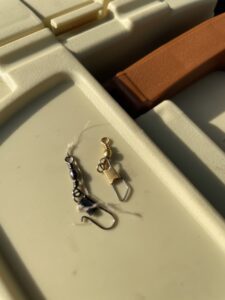 Plenty of fishermen use swivels, chiefly because they help reduce line twist, which is problematic when fishing lures that have a tendency to rotate, like spinners and spoons. However, swivels can adversely affect the action of some plugs, specifically very small stick baits and twitch baits, and even more noticeably, neutral buoyancy lures like the Rapala Husky Jerk.

Admittedly, swivels have some advantages. Like a Rapala knot, they enable the lure to swing and swim freely. Also, they won’t interfere with the action of floating or sinking plugs, so they aren’t much of a concern there, unless your target species is exceptionally leader-shy.

However, they will devastate the action of micro-plugs, and they will cause a nose-down pause on neutral buoyancy lures. They can also cause suspending lures to sink, which makes it very difficult to fish them effectively, especially if you are really relying on their neutral buoyancy to focus on a specific section in the water column.

The solution is simple – know when to avoid swivels. They can be practical with some crankbaits and sinking plugs, but as a general rule, stay away.

Alter the Buoyancy Yourself

Another alteration you can make to fishing lures – plugs, specifically – is to manipulate the buoyancy yourself. Some fishermen add weighted tape or lead weights to floating plugs to cause them to suspend, or to sinking baits to cause them to sink more abruptly. You can experiment with tactics like this to customize the action of your plugs, which is beneficial for one very specific reason – the more uniquely your bait behaves, the more likely it is to trigger strikes, especially among educated fish.

Bonus Tip: Make Your Own Lures

You can also make your own lures at home, such as simple inline spinner baits, with a few basic parts and tools. They’re deadly on many species of freshwater fish, and you’ll be nearly guaranteed to be throwing something at the fish that they haven’t seen before. Check out my recent post on how to make your own spinner baits for a step-by-step tutorial.