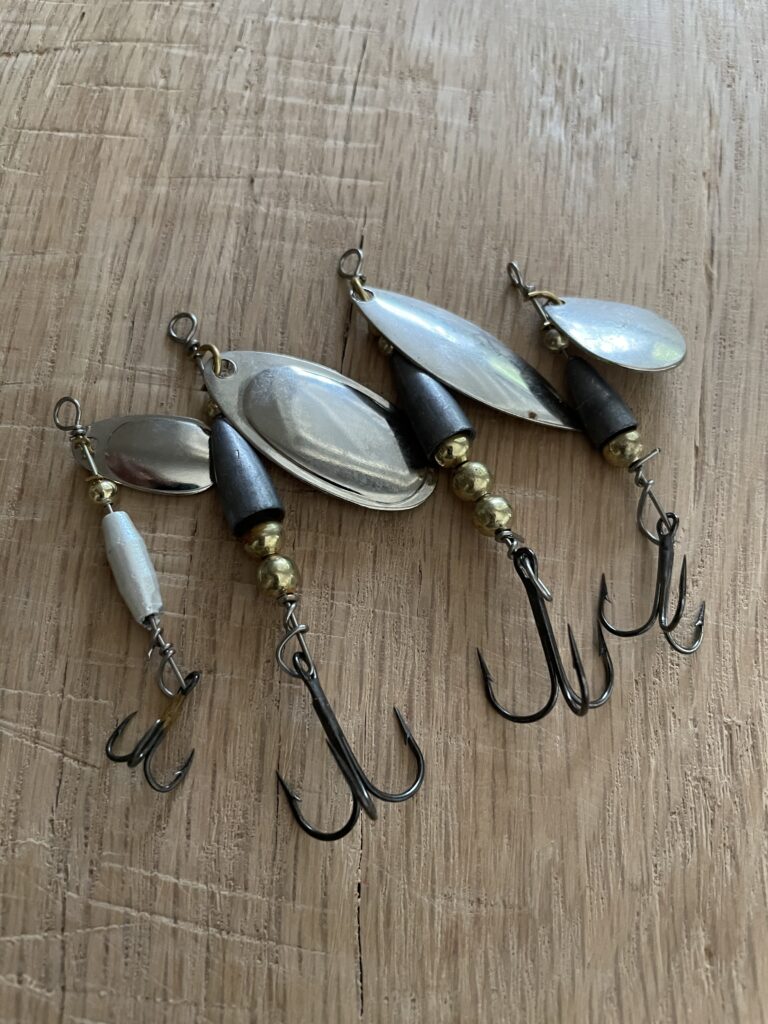 Here it is, another exhaustive post that promises to provide you with a hitherto closely-kept secret that will magically enable you to catch more fish. But this is no gimmick, and it’s not even a secret. It’s something that serious fishermen have known forever. The reason more fishermen won’t take advantage of it is because it takes work. Simply put: make your own lures, and if you hold all else equal, you will catch more fish.

This article will start with spinner baits – specifically inline spinner baits – simply because they are easy to produce, can be made very cheaply with commercially available parts, and unlike plugs and other metals, require almost no testing or tuning to run effectively.

There are several advantages to making your own lures in addition to the fact that they will probably be more effective on fish, especially those that are subject to a lot of pressure. For one thing, it will be more affordable, so you won’t feel as slighted when you break one off on a snag. For another, the pride involved in catching a fish on a lure you’ve made yourself far exceeds that you will experience with a store-bought, manufactured lure. It brings you closer to the pursuit. You’ll know what I mean when you catch your first fish on a lure you made – and here’s how you do it.

How to Make Your Own Spinner Baits

The first thing you’ll need to do before you can fish your own spinners is make them, and unless you plan on die-cutting, tuning and testing your own parts, you’ll need the help of a tackle supplier. I prefer Jann’s Netcraft (JannsNetcraft.com) because they have an excellent selection of parts at ludicrously low prices. I have made many different types of spinners from their parts and can personally attest to their efficacy. That said, Barlow’s Tackle (BarlowsTackle.com), Lure Parts Online (LurePartsOnline.com) and Fish USA (FishUSA.com) are also decent.

What you will need, at minimum, are as follows:

You will also need a pair of pliers to form the shaft of the lure and may choose to use something like a fly vice to secure and stabilize your materials. Split rings are also an optional part that can make it easier to add or remove hooks. Done the way I’m about to show, the hooks will not be replaceable, at least not easily.

To build an inline spinner bait, you start in reverse. First, you will need a wire shaft. The wire shaft in the picture below has an eyelet formed at one end, so I don’t need to add a split ring to it. 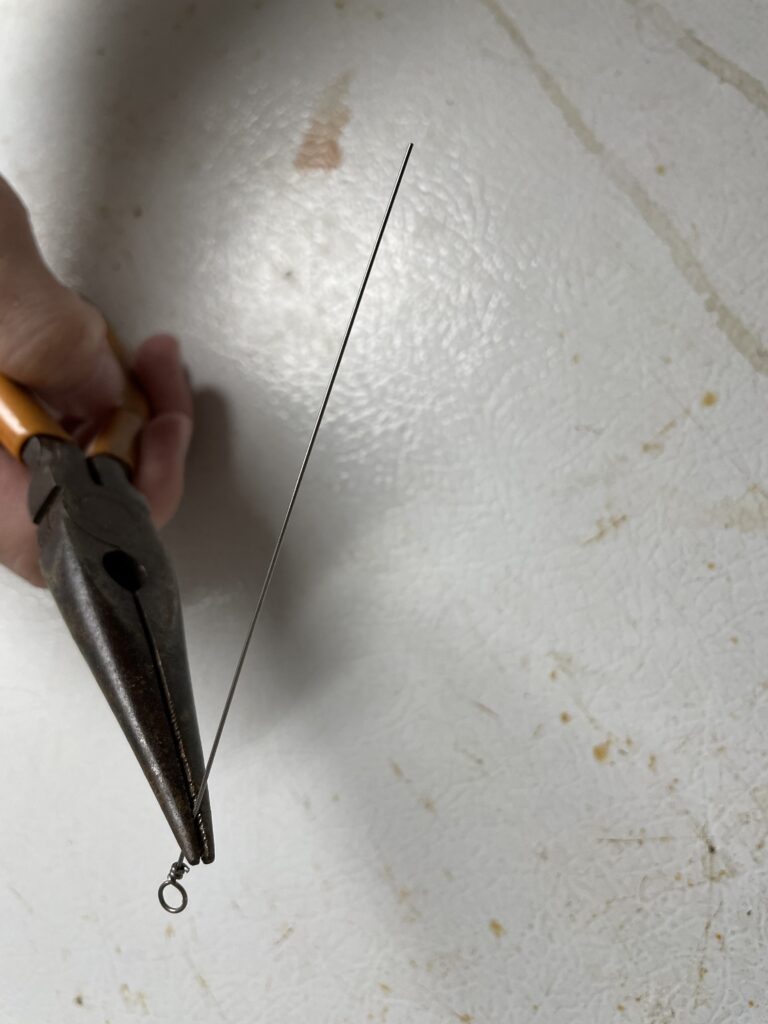 First, thread one of your clevises through the hole in a spinner blade, and then slide the clevis over the wire shaft as shown in the picture below.

Next – and this step is essential if you want your spinner to run at all – you need to add on at least one small bead to serve as a sort of buffer or ball bearing between the clevis and the body that you are about to add. I have tried many different times to get spinners to spin without these beads, and it has never worked. Let me know if you’ve had different experiences in the comments and perhaps I can offer follow-up insight.

Next, thread a weighted body onto the wire shaft after you’ve added the bead. The picture below shows a prefabricated body from Jann’s Netcraft, but you can easily and cheaply substitute steel or lead bullet fishing weights. They work absolutely fine as spinner bodies.

The critical aspects of inline spinner bait construction are done at this point. Finally, you’ll need to add a hook, but you should consider adding spacers in the form of some beads or lead weights, if the length of the blade you’re going to use would come in contact with the hook when the lure has been completed. If there isn’t adequate room, the hook will occlude the blade and foul the action of the lure.

As you can see in my partially finished spinner, below, the blade will have plenty of room to swing even with a hook attached, as it’s a small French blade. This is the same shape that Mepps uses in the famous Mepp’s Aglia – a killer multispecies pattern, by the way.

Finally, get a hook ready. You can use a single or a treble, the choice is yours. First, create a bend in the wire shaft using pliers, thread the hook on, and close the loop with pliers. Wrap the wire shaft around itself two or three times using the pliers, and then cut the tag end short. 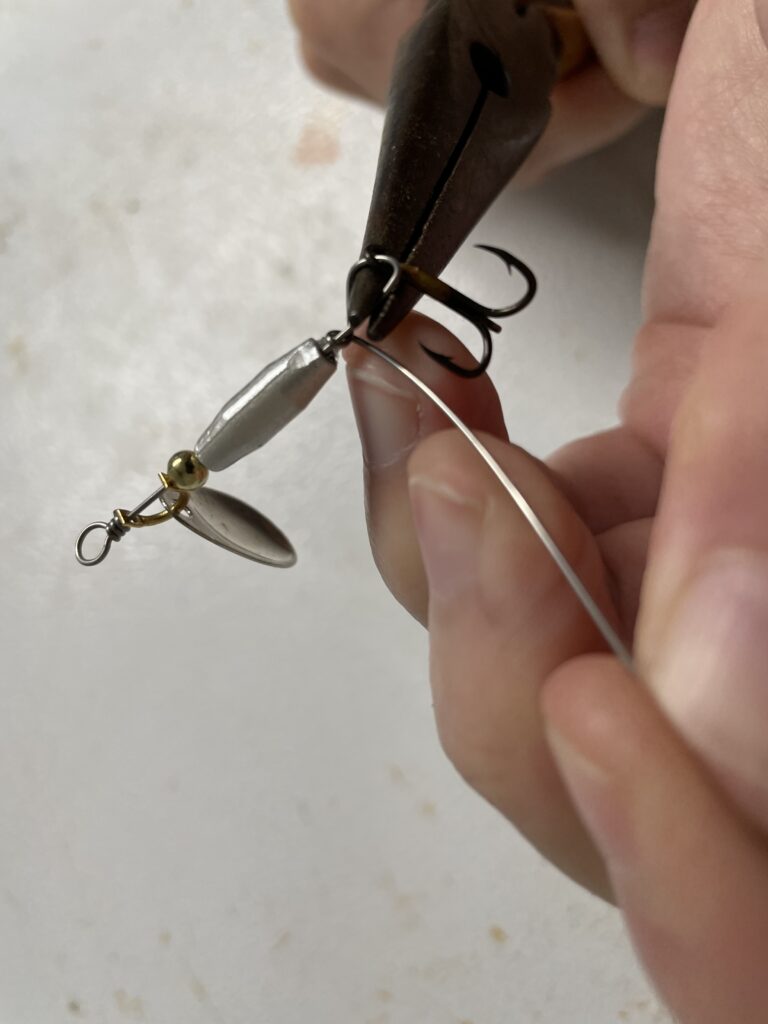 Alternatively, you can just close the loop without a hook, and then add a split ring with a hook to the closed loop. This is a little extra work up front, but will enable you to switch out the hook more easily in the long run. My method is permanent, and to replace the hook, you would effectively have to cut the hook free with wire cutters or ruin the lure. I simply make it this way because I have a lot of parts and it’s easier and faster.

That’s a lot of words to describe one of the easiest, DIY fishing lure projects, and that’s all there is to it. Take your new inline spinner bait out to a body of water and give it a cast to check the action. If you’ve followed these instructions to the letter, it should spin just fine. Now that that’s covered, you deserve a justification for all that work, besides the fact that it’s a cost-cutter and results in a greater personal reward when you actually set the hook. So why is the initial investment worth it?

Why Homemade Spinner Baits (and Other Lures) Will Catch More Fish

First, there’s the fact that spinners, objectively, are fish slayers. Both inline spinners and buzzbaits are outrageously effective on nearly every species that swims (especially in freshwater). I have personally caught scores of warmwater fish, and many, many trout on spinners that I have made myself. I’ve even caught several catfish, including the 14+ inch brown bullhead pictured below, on inline spinners.

Needless to say, my experience only reflects that of other fishermen throughout the world and through time. Spinners – both homemade and mass-produced classics like Rooster Tails, Mepp’s Spinners, Panther Martins and even models like the Blue Fox Vibrax have been pulling fish in for years.

They’re also amazingly easy to fish, and spinner baits are collectively the only class of lures that reliably catch fish on a steady retrieve. You can cast them out, reel them in steadily, and they will almost always produce.

That applies to all spinners, both bought and made, but it doesn’t cover any ground on why you should make your own. It largely has to do with convincing the fish to bite.

Fish that experience a lot of pressure have been treated to a world class education on all of the different styles and patterns of Mepps, Wordens, Blue Fox and Panther Martin Spinners out there. You can throw in some others for good measure. I’ve even heard that once a bass is caught on one lure, it will never hit the same lure again – or even lures that resemble it.

Something changes when you start throwing lures that you’ve made yourself. You’re all but guaranteeing that you’ll be throwing something at the fish that they can’t possibly have ever seen before. They might have seen or been caught on reflective lures or even spinners, but it’s a categorical impossibility that the fish will have seen your exact presentation. By making your own lures, you’ll be showing something new to the fish, which will almost certainly have a positive impact on your catch rate, especially in high pressure areas.

How to Fish Them

The other great thing, that I have briefly touched upon, is that spinner baits are extremely easy to fish effectively. There are plenty of techniques that you can use to fish spinners, especially when the fish are particular, but a straight, steady, slow retrieve will work just fine.

Simply cast the spinner to where you expect fish to be, allow it to sink a moment to your desired depth in the water column, and then begin a steady retrieve. I’ve heard it said that the best way to fish a spinner is just quickly enough that the blade rotates. In other words, as slowly as possible without stalling the lures. I’ve caught plenty of fish with slow, moderate and burning retrieve rates, but I have to admit I seem to catch more with a slower retrieve.

Sometimes you need to jerk the rod tip a bit at outset to get the spinner blade “started,” but after that a steady retrieve should keep things moving. If the fish are particularly finicky, you can add pauses and twitches to your technique in order to entice them to bite, which will sometimes produce strikes. With a pause, the lure will drop and the blade will flutter feebly, which is highly attractive to fish.

Make your own spinners, get out there, and put a bend in the rod.